Wow, typing that out slightly horrified me. It really does feel like “2020, too” at the moment as we are retreating back into quarantine to try and keep everyone safe since the number of Covid cases have skyrocketed here. We are bunkering down and working hard on Band Camp Boyfriend and making tremendous progress. I can actually sit down and play through the game now! This is HUGE! And it means I can share more screenshots with you! I mostly share screenshots on our social media (Tumblr, Facebook, Twitter, Insta) so if you're interested in more content, give us a follow on there! 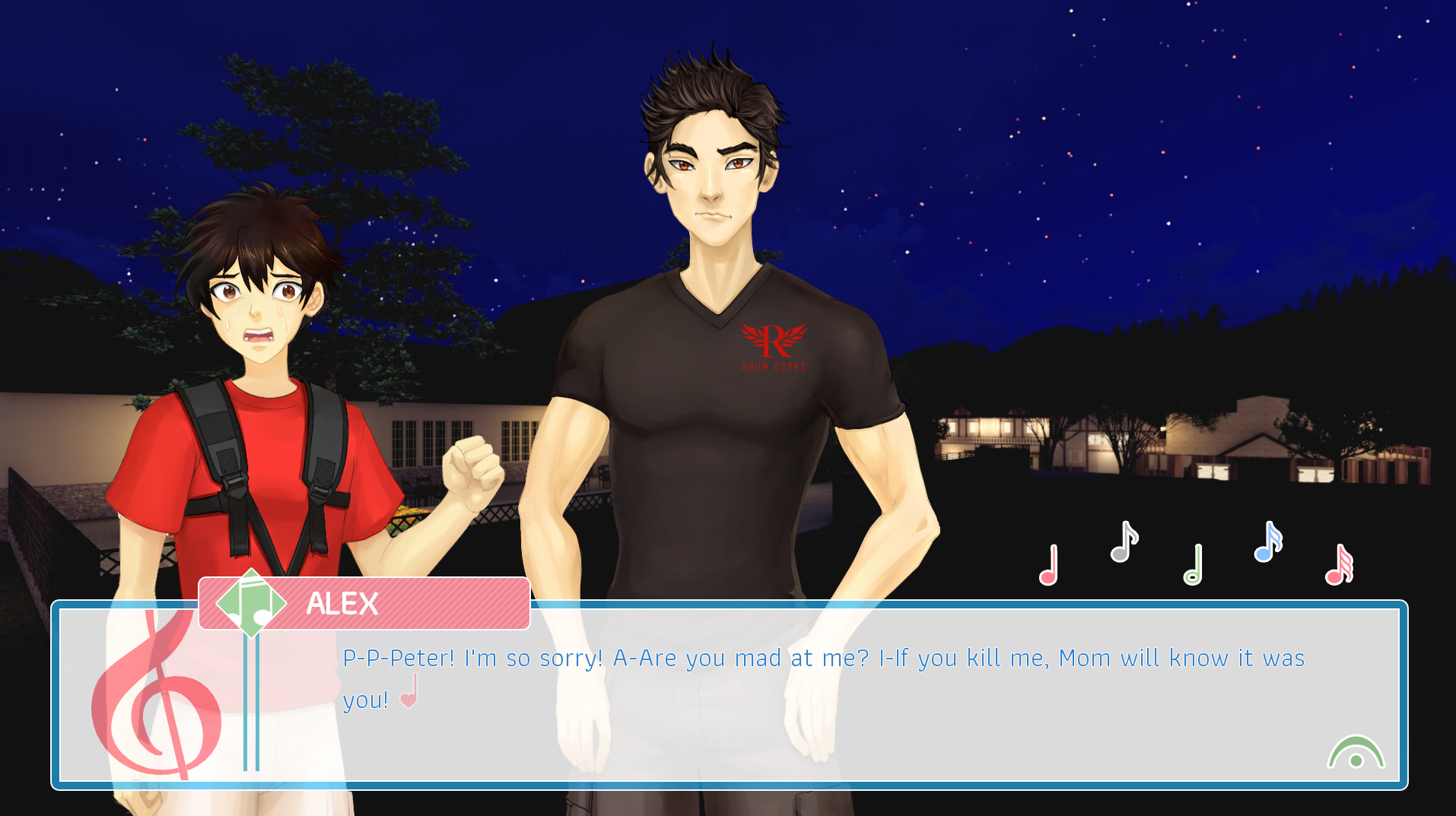 But it’s still missing a lot of pieces, particularly the audio. The voice acting really brings the characters to life and you absolutely cannot have a game about marching band without an amazing, original soundtrack. Now let me finally shut up and jump into our-- 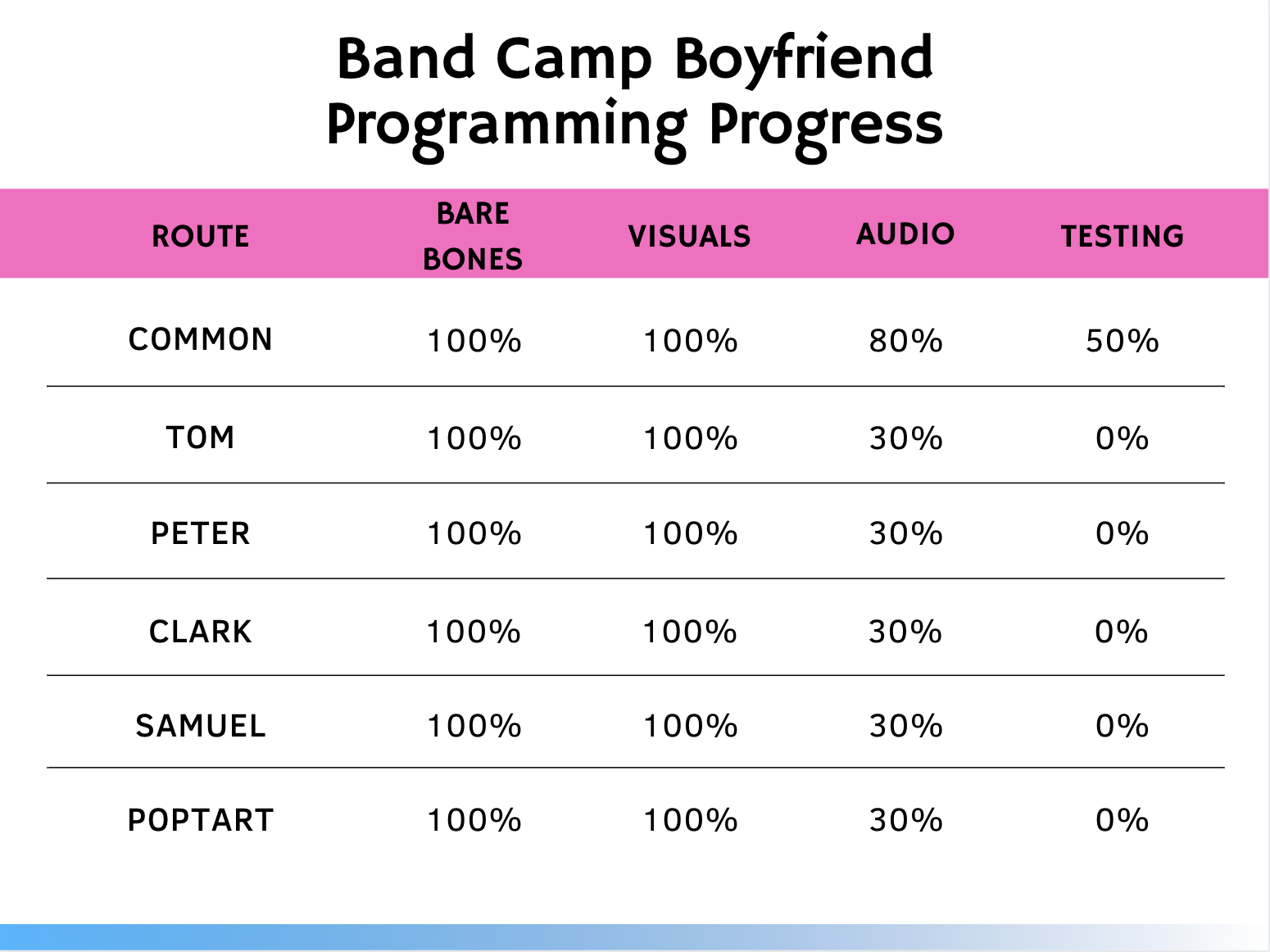 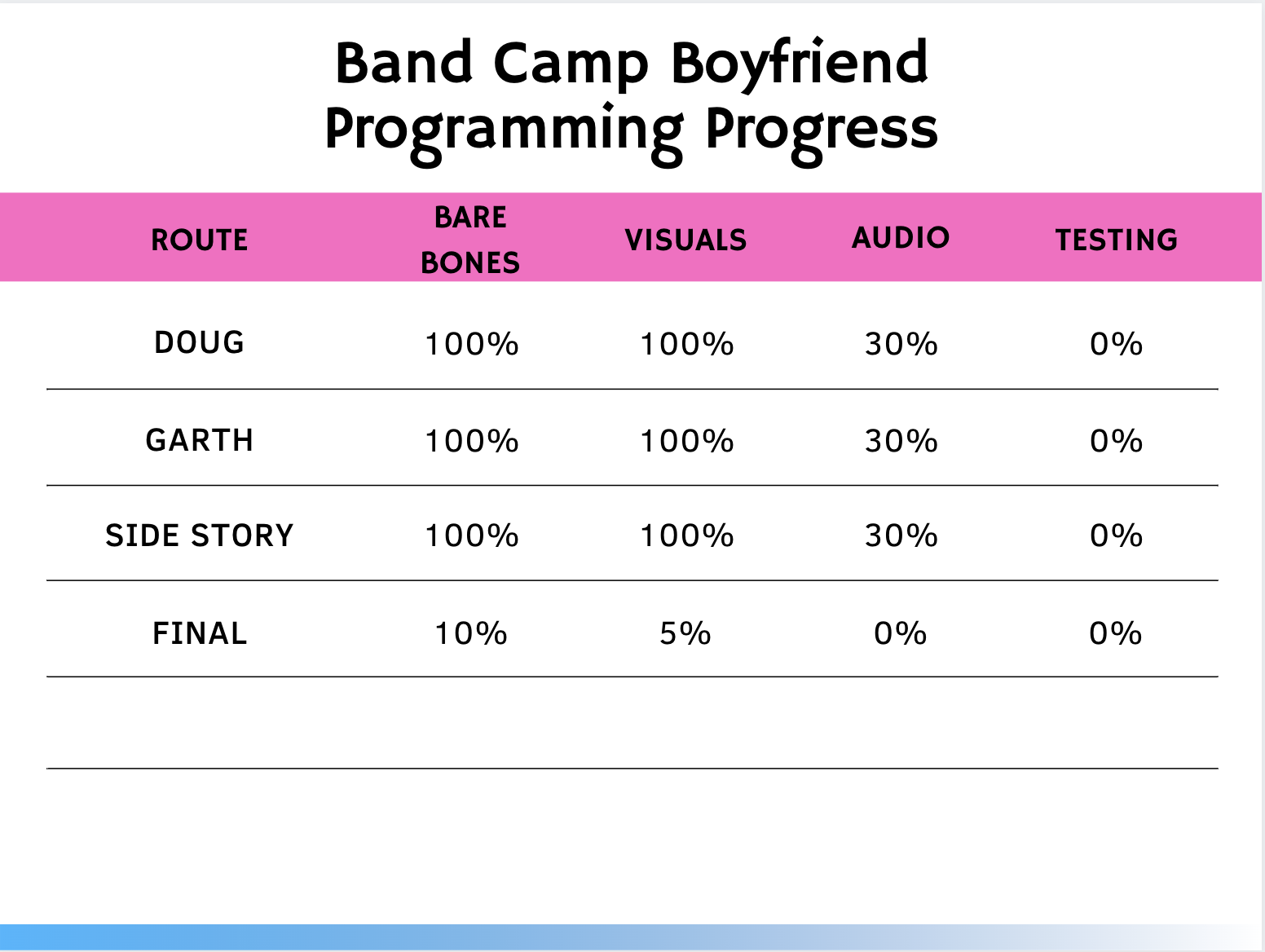 First off, you may notice an addition to my Programming Progress chart: Final. That’s right, a final route has been added! It was initially going to be DLC because we didn’t want it to delay the game’s release, but we decided the game did not feel complete without it.

But let me reassure you that it will not delay the game’s release at all! I may have just begun writing it, but I am a fast writer (the characters write themselves honestly) and we are taking steps to make the programming easier. Lastly, it’s also a bit shorter than the other routes. I’m confident I can get it done while my sister focus on the soundtrack, voice clips, and GUI. And my mom has once again offered to aid me with programming because she is the best. 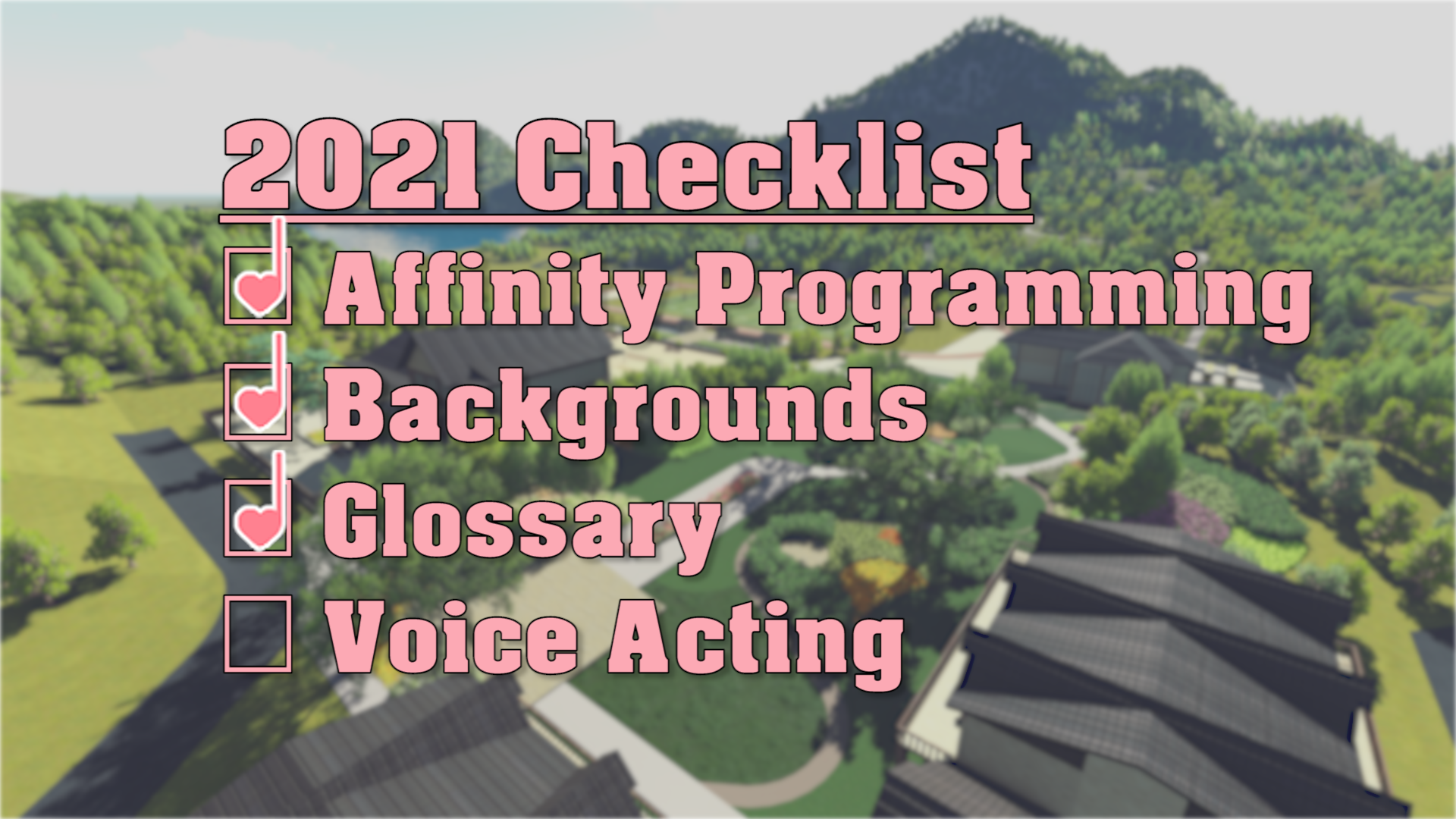 Just about! We don’t have all of the voice clips sent in yet, but we do have all of the backgrounds! WOOHOO! Alex completed programming the affinity while I programmed the new backgrounds and glossary cards into the game. These are really major mile marks! Seriously. We’re starting to feel like the end is in sight. 2023 release, anyone?

We’ve been sorting our goals into yearly quarters. So these are our goals for the next 3 months...

-Play through each route and test for crashes
-Write the final route
-Put out a casting call for the remaining characters (March!)
-Continue plaguing social media

Both of us are researching ideas for the GUI Extras menu, which contains the CGs and soundtrack. We’ll be diving into all my favorite otome games today for inspiration and mapping out exactly what we want. That will be fun! It’ll be a walk down memory lane for me (I’m coming up on my tenth anniversary of playing otome).

As always, thanks for sticking with us! I hope 2022 treats you gently and that there are better times ahead. Look forward to the next progress update in a few months and keep an eye out for that casting call!

Epic!! Super excited for the progress of this one, gotta say it's so charming and relatable, esp any trombone humor (i've heard every joke in the book as a trombone player)!!

Yay!! I'm always so excited when people play our game and mention what instrument they wield. Thank you for your support! We will continue working hard. :)

Wow you're moving fast with this game! I'm glad, just finished the demo and I can't wait for more!!! (Also your 10th anniversary of playing otome??? I'm only just reaching my 5th!)

I think you're the first person to have said that, we've been working on it for years! X'D We wanted to release it in 2020 but we underestimated how long a game would take to make and life got in the way. Anyways, I'm so glad you liked the demo and always happy to talk to another otome fan! What's your favorite game if you don't mind me asking? (Mine's Code Realize!)

Oh I just found the game recently so that must be why lol! Either way I totally understand it takes time to make a game, being a writer myself it's taken me a few years just to perfect some short stories! Also my favorite game is Mayday Memory (it's a mobile otome game by story taco inc.) but there are so many games to choose from, and I loved the code realize anime! Unfortunately never played the game... Also your demo is great! I absolutely loveee Sebastian and Tom! Great job with the story too, as someone who attended marching band in high school I can say for a fact you really nailed all the marching band aspects (in case you were wondering, I played the clarinet- thank god I didn't have a Clark for a section leader!)

Yay thank you so much, glad you enjoyed it! ^_^ That Tom is a charmer, I have a feeling he might become fan favorite (right now it's Poptart). Haha and I played the mellophone, which is probably the only reason why there is a mello rep!

Of course! It's a really cool game and I can't wait to see how it comes along, also pop tart is so cute!!! It's no wonder he's a fan favorite, peter's little brother is hilarious too. And oh that makes sense, I don't know much about mellophones my marching band didn't even have one :(

Oh yeah Alex is by far my favorite minor character. And nooo that is so sad! :'(

Can't wait! Great update. if the characters write themselves you should put them on the payroll! haha.